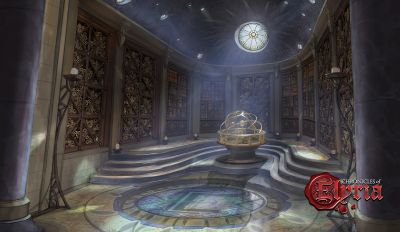 The Affinity system in Chronicles of Elyria is the Soulborn Engine's "way of keeping tabs on everyone, monitoring their choices, and using that to determine what options to present them with."[1]. Affinity is described as the tendency towards light or dark but it's the driving factor of the game's narrative and how each player builds their role and drives the story in Elyria.[1]

"A soul’s affinity is its tendency towards light or dark and is visible within the Soul Chamber. A soul is first created with a neutral affinity but it will not remain that way for long. Player actions leave a mark on the soul, blessing or tainting it. As a result, souls gradually develop an affinity one way or the other."

"Your soul’s affinity is respected by the destiny system and the dynamic story engine. Conflicts and story arcs will initially be presented with no indication of the preferred outcome. It will be up to you to determine the best way to resolve the conflict. As your soul lightens or darkens, the story engine will learn from what you’ve done and act in accordance with your chosen affinity. While you might have once been asked to just talk to a player, you may later be asked to pick someone’s pocket, and then eventually to maim or kill someone."

"Be warned, affinity is a slippery slope. Once you move to the light or dark it becomes more and more difficult to resist. While not impossible, the Soulborn Engine will be giving you tasks and objectives which it believes best suits your nature. Doing the opposite will mean failure and there will be consequences for your action."[2]