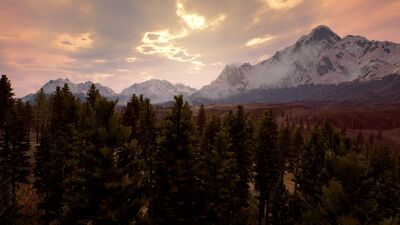 There are about 20 biomes in Elyria (not all on the beginning continent), each are relative to Earth's biomes with some variation but similarities are expected between Earth and Elyrian biota.[1] These biomes will vary in humidity, temperature (based on latitude), and elevation. These aspects will affect local weather patterns and soil conditions and consequently, each biome brings with it a natural set of adaptations of plants and animals, with unique flora and fauna. To ensure a consistent food chain throughout Elyria, the designers are starting from the lowest level of the food chain - lichen, moss, fungi, etc... and are working their way up. [2] Note that not every biome will be in the game upon launch.

Each biome is procedurally generated and on its own tectonic plate, this doesn't necessarily mean that all biomes have a coastal border. This means that subduction zones (areas where two tectonic plates meet) will exist along each of the biome borders and create active or inactive volcanoes. Meaning that the subduction zones create mountain ranges and the soil tends to contain larger volumes of igneous rock.[3]

"Additional biomes that are totally unique to the world of Elyria may be added."[4][5]

The Alpine Tundra biome is home to the Hrothi tribe. It used to go by the name of "Mountain Steppe".[8]

The Broadleaf Forest is home to the Kypiq tribe.[8]

Ref.:[4][6]
Grasslands: The grasslands have the least acidity in the soil, and so are a great place for fruits, vegetables, and grains that require a higher alkalinity. They do well with corn, wheat - really any stalk-based vegetable, fruit and nut orchards, and plants that require more light. It's good for watermelon, and cantaloupe, strawberries, and other moss-like, ground-cover fruits. The open plains of the grasslands also make a great food source for many forms of grazing animals. So grasslands are among the most popular for raising cattle. Cows, horses, etc.[11]

Ref.:[4]
In the Lower Montane Forest biome, the sturdy Mountain Juniper, Ponderosa Pine, and Jeffrey Pine trees will make up the the bulk of the forests that blanket these regions. These trees make an inviting home for owls, rabbits, beavers, chipmunks, deer, chickadees, and king snakes while also providing excellent camouflage for the Conifer Rat. Mountain meadows contain a variety of wildflowers such as the blue penstemon, astrantia snow star, and hearty breed of violet that provides both food and cover for the Flower-Cup Porcupines that call the region home. Otter Bears populate the rivers that wind through the steppe and feed on fish and the occasional, inattentive land animal that stops by to drink from the cool, mountain rivers. Canis Rabbits also range into this biome as well as the lowland plains. Farmers in Titan's Steppe know well the cutworm moth, as well, whose larvae can easily destroy entire crops if not kept in check.[12]

Ref.:[6]
Mixed Leaf forests biome is a transitional biome that typically lies between a deciduous and coniferous forest, or between a coniferous forest and warmer steppe biomes. Mixed Leaf forests do better with fruits and vegetables that require less light, less acidity, and similar weather patterns to the lower montane steppes. They are common location to grow roots, mushrooms, nuts, and honey, as well as tree fruits such as apples. The Mixed Leaf can be thought of as ideal biome for orchards and vineyards as well. [13]

Ref.:[8]
"No Description yet" The Savannah biome is home to the Owem tribe.[8] We are not sure what variant of savannah they live in exactly.

Ref.:[4]
The Shrublands biome is home to the The Waerd tribe.[7]

It's a transitional biome between tropical and arid regions.

Each server's world will be procedurally generated, and thus will have a different arrangement of biomes.

The pages in the category Game Servers offer lists of biomes per kingdom/area in game.

Biomes can be altered over time. [17]

Some other biomes that were mention in an old Q&A and in "Forging a Legacy" have been renamed since getting the Domain & Settlement Selection Map.[4] [7]

The Alpine Tundra use to go by the name of Rocky Mountain Steppe.