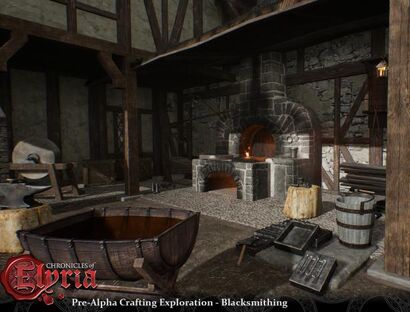 In Chronicles of Elyria, one of the many character roles, or 'professions', available to players is Blacksmith. Blacksmithing is their main trade, which involves the crafting of swords, axes, armor and other useful tools and equipment. Players may also specialize in Blacksmithing on a deeper level, in terms of being known to be skilled at crafting specific items allowing for more player choice and development.[1]

For example, if a player is skilled in making blades, has some knowledge in carpentry, and some experience with filigree, then they would be more specialized in crafting swords compared to other equipment like armor, tools or ranged weapons.[1]

Like those of other professions, Blacksmiths will also be able to craft a variety of items that can help with player storage, "Armorsmiths can create bracers with places for either retractable blades or wrist-mounted crossbows.".[2] 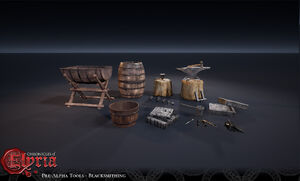