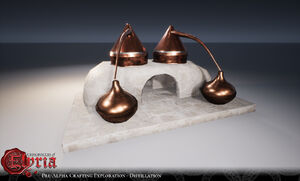 In CoE Brewing is the main skill of the Brewer, one of the character roles players can choose their character to specialize in. For the time being not much is known about how this will be implemented as only the presented concept image of a distillation stand has been disclosed. Note that a distillation stand is likely not the only crafting station a brewer will need, nor is it likely to be solely used by brewers or even specifically required for any brew a brewer will produce. Characters in the role of alchemist and/or apothecary may also have need if that device for their purposes.