listen)) are one of the twelve Tribes of Elyria, [1] and are found natively in the Taiga biome at the extreme latitudes of the world. [2]The Brudvir are one of the more physically intimidating tribes. They are on average 6'3" (190cm) tall, and are quite muscular with an average weight between 225-250 lbs. They have fair skin with pinkish undertones; red, strawberry blonde, or blonde hair; and often thick beards. Brudvir have distinctive yellow or hazel eyes and pronounced canines.[3] 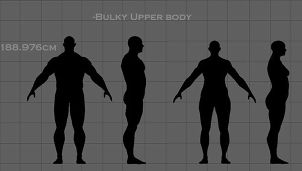 The cold, hostile environment of the Taiga has given the Brudvir certain advantages. They have excellent strength and resiliance, however their size reduces their agility and reflexes. They have a good sense of direction, an affinity for tracking, and some resistance to cold and disease. They are susceptible to alcohol and poisons.[3]

The Brudvir have long since made their homes in the northern regions of the world, that being the Boreal Forest (Taiga). While providing plenty of wood for housing and shelter, and plenty of animals for a small settlement, the scarcity of food and the inability to cultivate makes the northern region impractical for creating settlements much larger than a village or town.

Instead, the Brudvir typically create small villages or hamlets, referred to as dens, within relatively close proximity of one another. This provides reasonable access to neighbors, while still allowing enough space between them to hunt and gather for food. That all being said, the following list shows the typical resources available to Brudvir. 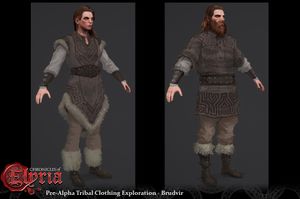 Due to the natural abundance, Brudvir architecture is mainly composed of cedar and other tall conifers which are native to the Taiga. Sometimes just looking like log cabins, the wealthier Alpha and Beta members of society take time to cut timber from the logs in order to create pleasant-looking framed houses. Due to the Brudvir's talent for carpentry it's not uncommon to see nicely cut square-cornered buildings with reliefs carved into the boards. Similarly, carvings of animals and Mann often adorn the Brudvir buildings and structures.

It's believed that the Brudvir, along with the Neran, Kypiq, and Hrothi, are descendants of the pre-historic race of Mann known as the "Proto-Neran".[10] An unknown catalyst caused the Proto-Neran to flee their original homeland and fracture into three tribes.[11]

One of the main stories in Brudvir folklore is the story about Ilva, The she-wolf, who is said to be the first to connect with a wolf pack. Her story is known as 'The Leader of the Pack' and it provided in its entirety on the page about Ilva.[12]

The Brudvir have learned vigilance and mental fortitude from the animals of the Taiga. This makes them more strong willed and focused than other tribes. They have particularly tightly knit family units, known as packs. Brudvir means, "Brother to the Wolf," and their social structure is often compared to that of wolves. Brudvir are exposed to the harsh realities of birth, death, illness, and disease at a young age, and embrace them as a reminder to cherish the support of their pack.

Brudvir are excellent hunters and trappers, and the most skilled lumberjacks and carpenters in Elyria. The care and skill they devote to their crafting causes them to spend additional time crafting each item than is normal for other tribes. Their art commonly depicts man and beast together, or the "Tairm" or "vacant", those who are believed to have lost their souls as a punishment.[3]

While their relative isolation has left the Brudvir somewhat lacking in social graces, they are quick to identify the motives of others, especially foreigners. They place a very high emphasis on Leadership skills. Songs are composed and sung in honor of pack members, great leaders, historical figures, or the spirits of the world.

The Brudvir's native language is Denhørt, a language spoken predominantly in the frosty mountains of the north. The subtle distinctions between many sounds used in this languages are seen as overly complicated to non-native speakers. Moreover, most Brudvir can easily switch to Neran if needed.

The Brudvir follow the Faedin religion. They are animists who believe the physical and spiritual planes are inextricably linked, and both Mann and animals are filled with spirit. The Brudvir believe that souls begin as animals and over multiple lifetimes learn enough to reincarnate as a Mann. They have a particular kinship with most forest animals, but particularly wolves who are believed to be the final incarnation before becoming Brudvir. They have no reluctance towards hunting to survive, believing that they offer their prey another chance to ascend.

The Brudvir spend Winterswatch, their name for the Longest Night, fortifying their settlements to withstand the raids and attacks from those facing starvation in the long, cold dark.[13]

In addition, Brudvir allied with nearby Hrothi settlements will often work with them, “earning” their share of the Hrothi’s gifts by fortifying and securing the Hrothi’s expanded food stores and aiding in their disposition.

Hunting is scarce in this period, and so the Brudvir in settlements dependent on their hunting prowess often form elite hunting groups that will range further than usual in this period, seeking prey typically too dangerous to consider in normal conditions.

The Festival of Passage is a major ritual of the Faedin religion.[14] The Brudvir celebrate this in their own manner with the Pursuit of Passage.[12] This comprises a hunt lasting a full month, where Brudvir dress up as wolves and attempt to join the wolf packs, and then proceed to hunt with them. They hunt and kill in order to usher in the end of an animal's life to prepare for Queen's Gaze and the chance for reincarnation.

The Brudvir observe the year of the Passage more intimately than either the Kypiq or the Janoa. The year is spent connecting with the wolf spirits in a ritualistic hunt known as the Pursuit of Passage. The ritual commemorates an event in the deep past of the tribe, where the wolves and the Brudvir connected for the first time. Those who participate don wolf garb and attempt to join a wolf pack, connecting with the spirits of the pack and joining in their hunt. The Pursuit of Passage also stands as the first sign of the dark winter to follow in a few short years. It is taken as a good sign for the coming Longest Night when more of a settlement’s Brudvir succeed than fail in the ritual. Many attribute the amber eyes of the Brudvir to the first Pursuit, pointing to it as proof of the tribe’s connection to the spirit of the wolf.

To commemorate the howl of Ylva's pack, the first wolves to connect with the Brudvir, they use a special type of flute that enables them to produce the howling sound of wolves.

The Hrothi may use this as a time to foster and encourage relations with the Brudvir, for example by offering to sell them thematic weapons.

The Brudvir are famous for their wood carvings and mystical totems, with virtually all of their works hailed as the most impressive among the lands. Carved from the mighty conifers, a recurring theme in Brudvir art is the depiction of man and beast side by side, sometimes blurring the line between the two.

There is also a concept that exists in Brudvir culture of "The Tairm", or "vacant". This refers to those they believe have, through some event or punishment, lost their souls. The depiction of such an event can be found in certain works within the Great Libraries of the Hrothi, and stories of individuals who suffered such a fate are often told verbally to their children to encourage good behavior. The word "Tairm" is not used lightly, however, as having a lost spirit is a fate akin to eternal death.

They sing songs honoring the spirits of the world, and the greatness of those came before. Whether it is the personal accomplishments of a venerated leader, or a loved one, they may choose to honor them with song.

The acid in the soil from the coniferous trees of the Taiga makes farming most edible plants difficult, so the Brudvir rely on hunting, gathering, and livestock for food and clothing. The scarcity of resources limits the size of settlements. The Brudvir instead create a number of small settlements, or dens, to offset the need for space to hunt and gather with the desire for access to neighbors. The Brudvir commonly choose professions as animal trainers, hunters and trappers, traders, carpenters, lumberjacks, leatherworkers, or shamans.

Brudvir society is split into Alphas, Betas, Gammas, and Omegas. Alphas, including the Bruékonne, or "Brudvir King", Bruérag, or "Brudvir Commanders" and, Bruégot, or "Brudvir Chieftains" lead the tribe. These are similar to the titles of King, Duke, and Count respectively. Betas lead dens; Gammas see to the crafting, construction, and cooking of the den; and Omegas are hunters and gatherers.

If no heir exists for a leadership position, a Casus Belli is granted to the underling with the highest leadership attribute. 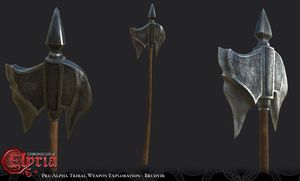 The Brudvir have strong warriors scattered among the dens who can be called to battle in times of war, but no standing army.[3]

Yoru - The Yoru generally keep to themelves, but will come to the aid of the Brudvir in times of great need, which are rare enough that few Brudvir have seen a Yoru. Tales of the ice giants are popular among Brudvir children.[3]

Hrothi - Often living in bordering biomes and sharing a spoken language, the Brudvir are friendly neighbors to the Hrothi. Each tribe's dedication to working wood or stone creates mutual respect. A positive long term trade arrangement, with the Brudvir trading food and protection for the Hrothi's metal and stone, cements their friendly relations.[11]

Neran - Although they share common heritage, the Neran and Brudvir can at times be uneasy allies; their religious and cultural differences often stand in the way of what should be an obvious alliance. Many Brudvir view the Neran as disrespectful and prodigal, although the high-quality fabrics and food that the Neran provide make the harsh winters of the Taigas easier to bear. In turn, the Nerans turn to the Brudvir for their skilled wood-workers.[10]

Kypiq - While not enemies, the Kypiq and Brudvir disagree on religious matters. They both follow the Faedin religion, but while Brudvir cut treat trees as a resource to be used, the Kypiq have strong beliefs about protecting trees and preserving forests. The Kypiq at times mock the Brudvir by calling them dogs, a reference to their kinship with wolves. The Brudvir, in turn, say that Kypiq are the reincarnations of squirrels.[3]