Chronicles of Elyria includes many ways for players to resolve and start conflict with one another. One of the most direct of these is starting physical fights and duels with your opponents. A player's ability to physically fight others is governed by that player's skill levels in the combat category, one of the six top-level skill trees in the game.

The controls a player can put to use while engaging in a combat situation with his character are still under development. Preliminary information is presented on the following dedicated page: Controls. 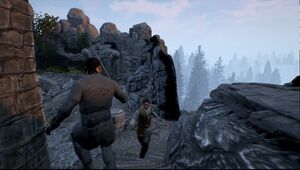 Combat mechanics have been referenced by the developers since the November 2nd Q&A.[1]

However combat between one and ten percent mastery swordsmen is largely balanced, player skill not permitting.

Ref.[2]
Each combat movement, be it through the swing of a melee weapon, or the deliberate movement of the player, results in improvement or worsening of a combatant's tactical position towards an opponent. So, in combat, the momentum of offensive and defensive actions, and the inertia of the player and their weaponry, affect the players position. Players will need to keep this in mind when engaging in combat and train their combat actions along with moving their characters about. The two gif images below illustrate the result of melee offensive action on the positioning of a player.

Health points don't exist in Chronicles of Elyria.[3] In its stead, player health and well-being is represented by vitality.

Vitality is a combination of all the various bars you might be used to in other games rolled into one. Health, fatigue, hunger, thirst, all represented as one mechanic.This system is not made to simplify things, however. It is so your actions in one area now impact other aspects of your character.

There are pause points. Times where you will be weaker. Occasions for attackers to be spotted before they take up their arms. It means that there is room for the story, room for exploiting the actions of others.

For more detailed info on those, see the page on Combat Skills. 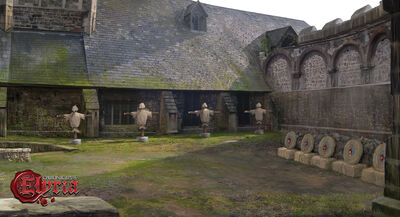 Ref.[4]
Training is an essential part of acquiring combat skill. This isn't just relevant for the accumulation of skill points, but also for the effective training of player skills. The effect of using training sessions to get accomodated to the controls and the view you have as a player (camera position), is anticipated to be significant. Moreover, as direct (PvP) combat will be only a small part of any players actual combat experience in-game (contrary to the situation in many MMORPGs), training will be essential for any standing army, law enforcement forces or military reserves / militia in order to be prepared once real conflict enters the scene of a player. Whether it be a massive Call-to-Arms or a thief that needs to be halted, players better be prepared in the MEOW called Chronicles of Elyria.

For the purpose of training the game foresees in the usage of dummies and targets for practise of melee respectively ranged combat. this is illustrated in the images shown here.