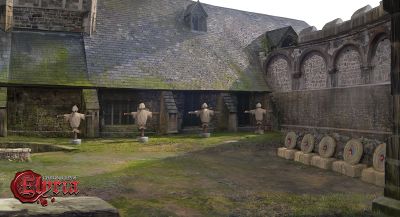 Combat skills are the skills that control the player character's intrinsic, non-circumstantial, non-talent-based ability to fight. This includes fighting unarmed, with 1 handed and 2 handed weapons, with thrown and ranged weapons, and utilizing additional tactics such as two-weapon fighting, and sneak attacks.[1]

Melee weapons with blades, with a cutting edge, are distinguished by the shape and length of the blade. Three sub-categories are identified: Axes, Long Blades and Short Blades.

Examples of long bladed melee weapons are Rapiers and Swords. There is further distinction in long bladed weapons as they can either be wielded with one or two hands.

Blunt weapons are weapons mainly used to inflict bulgeoning impact on a target. They are divided in two sub-categories based on whether they can be wielded with one hand or if two hands are needed to use them.

Dual Wielding is a special combat skill that allows to effectively use two (one-handed) melee weapons in alternate sequences, whether regular or randomly controlled by the combatant.

For more detailed info on these, see the page on Combat.

Combat skills can be trained. For more information on this aspect, see the section on Training on the Combat page.