The bane of every MMO economy is the fundamental problem with player relations - other people in MMORPGs are completely untrustworthy. Consequences for fraud in MMORPG social environments are often so trivial that concrete deals between people who aren't already friends outside the game is impossible. Since Chronicles of Elyria relies so much on the ability of players to form meaningful relationships, coalitions, and factions, Soulbound Studios has designed a contract system to facilitate those agreements beyond what would normally be expected with random gamers. Drafting contracts not only allows players to self-regulate a wide range of multiplayer activity, but in Chronicles of Elyria, is also a trade in of itself.

There are two types of contracts in Chronicles of Elyria, explicit and implicit, each initiated differently. Explicit contracts are like your traditional contracts; written documents which are reviewed and signed by all members who want to execute them. Signing the contract means you agree to uphold your end of the bargain or face pre-arranged consequences. Contracts, explicit or implicit, can be one-to-one, one-to-many, or many-to-many. This allows for an agreement between you and another, between you and several other people, or amongst a collection of people. Implicit contracts are contracts that you may unknowingly accept, e.g. noticing changes in circumstances after wearing an enchanted item. 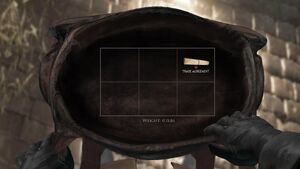 A trade agreement in a player's inventory 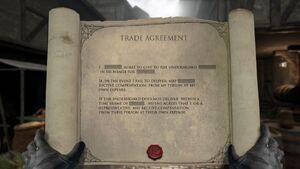 Early example of a trade agreement

Each type of contract acts like a template until the point in which it’s activated. At that point, all the blank spots for things like names, quantities, costs, and references to items or activates are filled in during negotiation.

As Chronicles of Elyria uses Contracts in place of what would normally be Quests or Tasks in other MMOs, it shouldn’t surprise you there are contract templates for many of the same activities you’d be asked to do in other RPGs. For example, there are contracts to:

By providing stock contracts for the above activities it’s immediately possible for players to create tasks in the same way NPCs do. You could log off for the day and leave your OPC behind, offering X amount of money or other objects in exchange for placing resources in your shop. When someone drops the resources in your warehouse, they can collect the money from you. But how does the Soulborn Engine know the contract is complete? I’m glad you asked.

Characters going about their daily lives are constantly doing things. They’re going in and out of regions, interacting with items, talking to people, trading, engaging in combat, etc. There are literally dozens of things your character can do while in Elyria and each of them generates a Character Event.

Whenever you a sign a contract the Soulborn Engine begins waiting for you to perform specific Character Events related to the contract and uses those to track your progress.

This system is also used to help you track your progress on-screen. Selecting a contract you’ve accepted from your inventory allows you to track the contract’s objectives. This, like in most MMOs, gives you an on-screen reminder of what you're trying to do and whenever you complete an objective the user interface is updated to reflect your progress.

Local, Regional, and National leaders can draft laws as part of their region. Once signed in as law, anyone who steps foot within their jurisdiction is bound by the implicit contract. This gives governments a huge amount of flexibility with respect to customizing what is and is not allowed within their domain, and what the consequences are.

To make understanding the legal system easier there are different types of contracts for different types of laws. There are contracts for the tax code, criminal code, citizenship, land ownership, inheritance, and even government type. As with other types of contracts it’s impractical in most situations to advance your Contract Writing skill to a point where you can draft laws. Instead you’ll want to retain the services of a skilled Contract Writer to draft the laws on your behalf. Then you can use the regional management UI to institute the laws.

The other type of implicit contract are enchanted or artifact items. With these, simply equipping or wearing the item is enough to initiate the contract. Perhaps the most important example is the Ring of the King. Once someone with sufficient claim puts it on, they are bound by contract to fulfill the role of the king. This grants them all the benefits and privileges therein, but breach of contract means death and a land without leadership until the next person accepts the contract.[1]

Finally, implicit contracts can be used to manage designation of use of land or property]], as explained in the related section on land use on the page on Land Management. [2]

Like most features in Chronicles of Elyria, the Contract system introduces a fun new mechanic which is inherently exploitable. It’s designed to increase your confidence that it’s safe to do business with someone, however - like in our world, that's not always the case.

Whenever you initiate a contract there’s a set of consequences for breaking it. If either party breaches the contract they’re at risk of having to pay the consequences. These consequences can be enforced but it's up to you, or someone on your behalf, to enforce them.

Once a contract is believed to be broken, and assuming the player has a copy of the contract, you can use it to generate a Bounty Token. This token gives the possessor the right to apply consequences agreed in the contract to the person who broke the contract. This can mean taking money or items off of them, reclaiming things from their homes, or even incapacitating them and bringing them back to face justice.

Which types of consequences are allowed is based on regional laws. Depending on the County you're in it may be legal to retrieve your stuff yourself. In others counties it may be necessary for a Sheriff to reclaim your goods. And, in yet other counties – those which have chosen a more lawless disposition, there may be no way to enforce a contract at all.

To enforce a contract, you must still be in possession of that contract.

The other common type of implicit contract are enchanted or artifact items. With these, simply equipping or wearing the item is enough to initiate the contract. Perhaps the most important example is the Ring of the King. Once someone with sufficient claim puts it on, they are bound by contract to fulfill the role of the king. This grants them all the benefits and privileges therein, but breach of contract means death and a land without leadership until the next person accepts the contract.