Crafting is the act of taking existing raw materials and items and modifying or combining them to create new items. Whereas in other MMOs, crafting might be an optional activity alongside gathering the gear that spawns automatically, crafting plays a key role in the Chronicles of Elyria economy, as it's the only way non-natural tools like pickaxes, walls and armor are created. In addition, crafting itself is one of the seven major skill trees, and the quality of items will depend on the quality of its materials and the personal and numeric skill level of its creator. Different professions, such as candle making, swordsmithing, and tailoring, will require players to specialize in different individual skills. Because of this, crafted items are a highly valuable commodity, and market forces encourage people interested in crafting to pick a trade and barter their brand of items with local communities.

One of the problems with introducing crafting as a unique economic activity in an MMO is an inability to get started with a specific crafting skill or profession. Becoming a blacksmith usually requires money to buy resources, tools and crafting supplies. In most MMOs, this requires players to head out into the fields to kill enemies, acquire currency and then come back and sell off unwanted minerals before you have enough money to do what you want to do. This defeats the point of specialization and means that, in order to become a swordsmith, a player must engage all aspects of gameplay at the same time regardless.

In CoE, thanks to the power of contracts, apprenticeships and loans are viable player business opportunities. Most villages or towns will have a resident expert in a specific crafting skill, willing to offer apprenticeships to people starting out in the craft. Enterprising blacksmiths are then in a position to help develop the skills of the new players, and, because they're getting free labor from you, cover the supply costs. Once you move from Apprentice to Journeyman, those aspiring blacksmiths will hold the human capital necessary to get paid for their work.

Reaching the rank of Expert in a crafting or gathering profession will usually result in NPC loan agents being willing to grant you a loan to set up a solo enterprise. They'll take everything you own as collateral, of course, but it means you can start your small business with nothing but your wits and dedication. Just as well, PC's may be willing to sign a loan contract even earlier than that if they trust your ability to pull a profit.

Partly as a way of preventing grind, Chronicles of Elyria allows for intense item specialization. One can become a master of crafting specific items even before becoming a master at a specific craft or trade. This has to two fundamental implications.

It means that if you want to become a master weapon smith, able to create Sword blades that are unparalleled in the land, you can do that simply by crafting sword blades. You don't have to craft metal tools, axe blades, or metal stakes in order to get your blacksmithing skills high enough. Spend your time focusing on the things you want to make.

CoE is a game of technology and research. At some point in the future someone may (hypothetically speaking) discover the ability to make longbows, recurve bows, and eventually compound bows. In other MMOs, the discovery of a recurve bow would force all new players to grind through knowledge of how to make short bows and long bows just to learn how to make a recurve bow. However, In Chronicles of Elyria, beyond gathering the materials necessary, there are no skill requirements for crafting any item, no matter how newly discovered or advanced the recipe. Of course, the early results may be of poor quality, but mastery of creating recurve bows is gained more quickly when crafting recurve bows, as opposed to crafting short bows as an intermediary.

As with many other MMOs, Chronicles of Elyria allows the transfer of knowledge, specifically in the crafting skills, through recipes. Having a recipe and being able to read the language it is written in grants you the knowledge necessary to attempt to craft an item. If you also have sufficient skill, you'll be able to reproduce the item. Unlike other MMOs there's a synergy between crafting and the Scribing skills, as those who master scribing can create their own recipes to give to others in order to share the knowledge.

Whatever your crafting focus, your trade skill will require the use of one or more different crafting techniques to accomplish anything but the most basic crafting. Techniques are learned processes, or “tricks of the trade” for lack of a better term.

For example, in blacksmithing, when it comes time to impart hardness into a blade, you quench a heated piece of metal to cool down and draw the internal structure of the metal together, making it harder, but potentially more brittle as well. Depending on what you’re making as a smith, this potential brittleness may or may not matter. But supposing it does, what do you do to try to mitigate it? To keep your blade, for example, both hard and flexible enough to block an incoming strike without snapping you will choose between several techniques.

A simple example of a technique might be to “edge quench” the blade when it comes time to quench the blade and lock in its hardness, so that you harden only the cutting edge of the blade, leaving its back soft and flexible. To do this you would use a quenching trough rather than the more typical upright quenching vessel you’d see for things like swords. You’d take your heated blade and you’d put only the edge into the trough. If you were a bit more sophisticated – if you knew a different technique – you might instead apply clay to the back of the blade when heating the weapon for quenching so that it doesn’t heat up at the same rate as the edge. In either case, whether you clay the blade or just edge quench it, you’d create a blade that had a softer spine than cutting edge, making the blade more resilient and less likely to snap or shatter. However, each of the methods have their own risks and impart different properties to the blade being quenched.

Techniques are both the way a crafter advances their knowledge of a craft and the way that they can impart their own unique style to their work as a crafter. Many techniques are interchangeable within crafting recipes, allowing you to substitute one technique for another and still produce the item in question. It might be that you’re the master of the edge quench and so you never bother to learn the technique of applying clay to your blade. It might be that you know both techniques but prefer one over the other for the properties it passes on to the finished work. Why you use one technique over another is up to you.

Techniques aren’t just processes you can apply in the crafting experience, they’re knowledge that must be learned. So techniques also act as progress gates. It might be that a work product requires a specific technique. For example, to make most pattern-welded billets as a blacksmith you need to know how to forge weld. It might also be the case, however, that a technique isn’t required for a specific work product but is required to impart a property to a finished work. A smith might add a fuller to the blade to add the “lightened” property to the weapon, reducing its overall weight, for example.

In a small way, these properties take the place of stat bonuses given to you by gear in traditional MMOs. Properties can change the way a weapon or armor performs in combat, or alter the effect of eating food or drinking potions and other beverages. Techniques can be interchanged when they produce the same result. So for example, you might know several techniques for smelting iron ore into various grades of iron, such as for making steel. Which techniques you use as you complete a recipe will also change which properties are imparted to the resulting item. A smart craftsperson will want to learn as many techniques as they can, because their use is one way for the work to have its own identity and "speak for itself." A smith might use a particular set of techniques to create signature weapons, a baker may know the way to bake chocolate chip cookies that taste like home. Their secret is as likely to be a matter of which techniques they use as it is which ingredients were used. 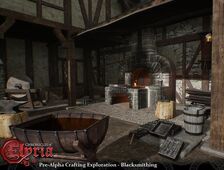 Example of a Blacksmithing crafting station.

While it is possible to do some crafting without crafting stations unique to the specific skill, specific tools are still required to make certain things. For example, you can carve a piece of wood without having to be at a carpenter's bench but if you needed to plane wood or route joints (more complicated work) then you would need the corresponding station with the correct tools. [1]

Chronicles of Elyria utilizes a component-based crafting model that both encourages collaboration and also allows Producers to specialize in the types of objects they want to create.

Swords, for example, are made up of several more basic components. In this case, crafting a sword requires a blade and a hilt, the latter being made up of a handle, a cross-guard, and a pommel. The handle again being made up of a wooden handle and some kind of binding.

To assemble a sword, one would simply use your crafting skill on the blade, select a recipe, and then select each of the components used in final assembly from their inventory, one by one, starting with the guard, then the hilt, and finally the pommel. Depending on the recipe, it may require tools to complete, or it may just need the physical strength of the crafter.

As the final product is assembled, there will be an opportunity to swap out components for higher or lower quality components as desired. Sometimes, changing the type of component, such as changing from a straight blade to a curved blade, can even change the type of item created and lead to the discovery of new recipes or patterns.

Chronicles of Elyria also uses the concept of progressive construction or "value added". This means it's possible to take a simple item, either assembled or unassembled and make it progressively better by adding onto it. For example, you can take any standard blade and add a groove to it to make it lighter. You can also take any existing blade and add filigree, etching, or even serration.[2] 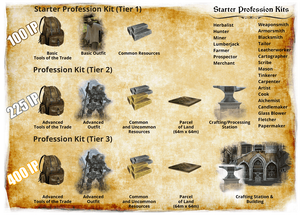 Since the actions and goals of crafters are determined by market and political forces, rather than by direct developer sanction, there is no formalized "list of crafting professions". As explained by Caspian, "Chronicles of Elyria doesn't define specific professions. Instead, it encourages players to take skills from across different skill trees and combine them in unique ways in order to define their own professions."[2] Most of these professions are suppliers or producers but there are other character roles as well.