Equipment is the general term used to describe a set of tools, items, and apparatus used or donned by a player to achieve a certain purpose. Wearable equipment refers to those items which the player may wear to defend, attack, gather resources, or simply to flaunt their sense of fashion.


What You See Is What You Get 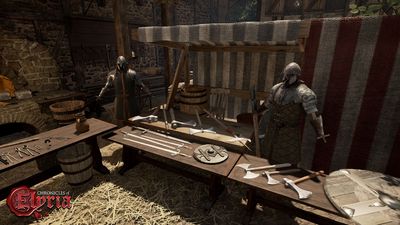 Chronicles of Elyria uses a system of "What You See Is What You Get". This has a couple meanings within the scope of the game. First, it means that when looting something or someone you are limited to only those which you can physically see on the person's body. This is true whether it's another player or an NPC. You won't attack an NPC wielding some powerful magic weapon, only to loot his body and find a different powerful weapon, several, or none. If you could see it, you can loot it. If you didn’t see it or they didn't use it, you likely won't find it.

This also holds true when hunting animals or beasts. The loot that you can attain will be something that would be realistically attainable from the animals body. For example, a giant brown bear will not yield a pair of chain boots. Rather, you would more likely find hide, meat, bones, teeth, or claws.

If you see a character wearing metal armor with a shield and sword and a backpack, they are wearing exactly that. You will not kill them only to find a broken dagger and some cloth armor in their Inventory.

The other important aspect of WYSIWYG is that you can evaluate characters encountered in the wild based on what they're wearing. Because there are no nameplates over NPCs or animals that show their relative level, it'll be up to you to determine if you're up for the challenge. One of the ways you can do that is by glancing at the gear someone is wearing.

If you see someone approaching you on the road in a shirt and pants, leather jacket, and no visible weapon, they're likely to be of little risk to you. On the other hand, if someone approaches wearing a studded leather vest, a rapier, and an off-hand dagger, chances are good they know how to use them.

This system does away with the "infinite space" pocket-dimensional inventory found in many games and introduces a limited inventory system. 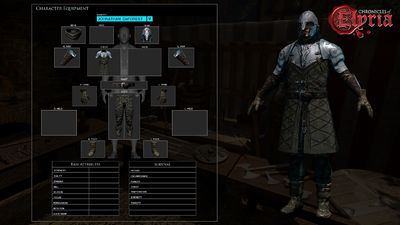 Equipment in Chronicles of Elyria is broken up into several different equipment slots. These are:

Different slots can often equip several different types of items. However, the type of item equippable is often constrained by what else is equipped.

For example, hands can have either gauntlets, gloves, or rings, but it is not possible to have all three simultaneously. Furthermore, gauntlets act as both arm and hand items. So if you equip a gauntlet, you fill both item slots.

In addition to the above, the head can have many different things, but if you equip a coif, you can’t wear anything on the neck. Likewise, if you equip a hooded cloak, you can’t put anything on your head. While these combinations may seem arbitrary at first, they serve to identify purpose and functionality. Someone wearing a hooded cloak is likely trying to conceal their identity - not something generally done with a helmet. However, a mask and hooded cloak is completely - acceptable? 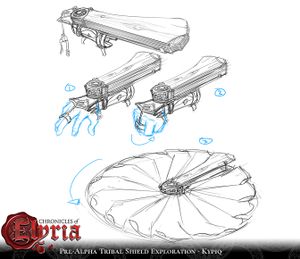 Weapons are created in different components that define their look: blades, handles/grips, and other requirements. For example, making a Katana would require a curved single edged blade with hidden tang (projection of a blade held by a handle) plus a recipe for a handle wrap and one guard. [3]

In order to customize characters to deal with different climates and occupations, CoE uses a unique layering system for equipment. Certain body parts have the ability to contain multiple different pieces of equipment simultaneously. 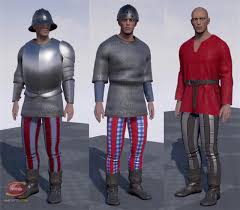 An image showing the layering of apparel on a character.

To accomplish this each piece of clothing is created as a full piece, and then cut up to support the various combinations of clothing. With different styles and cuts of clothing When wearing multiple layers of clothing together the layers underneath will simply be hidden where they would otherwise cause issues with overdrawing and clipping. This system is still undergoing changes.

This system supports up to three layers, depending on the slot.[4]

There are also equipment slots for jewelry and some other cosmetic items but these would be hidden below other equipment if you were wearing it. So you might be wearing a ring, but it won't be visible under your gloves (if you are wearing any). It's not necessary to wear equipment in every slot at all times since it is so dependent upon your activity. In that sense, a noble may choose not to wear gloves in court so that all those in attendance can see their signet ring. A hat might not be worn indoors due to local custom.

Chronicles of Elyria is unquestionably a survival game. It's designed to make people think about the actions they take in the wild in order to guarantee their survival. The equipment a character has on effects them in many unique ways, completely aside from the obvious need to carry food and water.

Players are also effected by the equipment they wear and the current temperature. If it's exceptionally cold out, players would be wise to bundle up with a jacket over their shirt and even consider wearing a cape or cloak to keep warm. The opposite is also true. If it's extremely hot out, wearing multiple layers of clothing, or metal armor could cause you to overheat.

On a clear day the weather, aside from the temperature, will have little impact on your overall comfort. However, if it's raining out, windy, or foggy, it will have an impact on your rate of movement. Likewise, if there's snow on the ground, or you're trudging along through a muddy swamp, you could become encumbered.[5] The heavier your armor, the more difficult the muddy ground will be to navigate.

Heavy armor sinks in bodies of water due to the weight of the armor and the inflexibility inhibits swimming, drowning in deep ocean waters will result in permadeath.

In Chronicles of Elyria, one size does not fit all. In fact, the same size may not even fit the opposite gender. In Coe, there's gender-neutral equipment, equipment for men and women, and equipment for the small, medium, and large. Wearing equipment too big for you will make it less effective, and wearing equipment too small may be impossible. Of course, this can be remedied by taking it to an appropriate craftsman and having it resized.