Families in Chronicles of Elyria provide a small, supportive social structure with a sense of identity, as players recognize themselves as being part of a family, a noble house, or a dynasty. They tie into the game's progress system by allowing you to pass resources you've gathered over a lifetime onto your heirs. Finally, they provide starting resources, a residence, and a source of learning in the early part of the game.[1]

Families are vital to the land and kingdom management systems. Families will build up their land, form towns, and establish growing dynasties. Families may grow powerful enough to become nobles and play the "Dance of Dynasties" – the process of arranged marriages, intrigue, assassinations, lies and manipulations necessary to work their way up in the governing system to become kings and queens.

That being said, the family you select has a huge impact on your social experience, and not just when interacting with other family members. Your choice of family (and their social class) impacts how other NPCs, OPCs, and players interact with you. The family you select will also determine things like what type and how big your starting house is, and how much land your family has for farming, mining, breeding, and other land-based activities. Finally, there's a set of game mechanics tied directly to the family system.

These are, in no particular order: 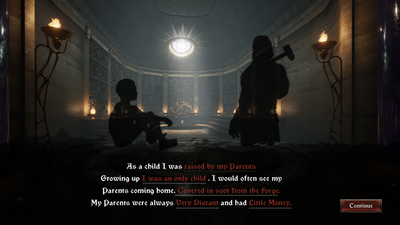 Family selection takes place during Character Creation, in the form of selections which tell the story of your character's early childhood and, in doing so, the game will match your story to the best-fit families, or it may tell you that no such families exist.[2]
If you are given a family code from a friend, you may choose to be "born" into that family. However, your ability to define the childhood and experiences of your newly chosen character may be slightly limited.

Marriage, what a beautiful thing.

Players characters will be able to marry other PCs and NPCs, which is not limited by gender. In other words, same-sex marriages exist in Elyria. However, in order for a same-sex couple to "conceive", they would need to seek an opposite gender player or NPC willing to enter into a Child Contract with one of the partners. Their genes would play into the child's genetics.[3]
Spouses of characters with high levels of notoriety and fame will not incur the same amount of spirit loss as their partner upon death, unless they themselves are of the same level of fame. However, having a spouse with a high level of fame also increases your own level of fame (just not to the same degree).[4]

Divorce will be a mechanic for two individuals wishing to end their marriage. However, the breaking of a contracts has consequences and if both parties of the marriage contract do not agree to separate then the individual who breaks the contract may incur consequences.[5]

When you create a child you're given three options of what to do with the new NPC. The options are:

Ref.:[6]
Heirs will inherit all of your belongings and titles when your character passes on. You can select your heir from any living NPC in your dynasty that is open or who you have the NPC code for. You need a certain amount of story points to inhabit your heir, but it should be easily reachable within about three months.

You can instruct your heir to pursue schooling or training so that they developed your desired skills when you take them over.

Families may use and boast their own Heraldry. Usually this is bestowed upon them as it is acquired by an influential individual in their midst, or through heritage.