listen)) are one of the twelve Tribes of Elyria, and are found natively in the Alpine Tundra, and Alpine Coniferous Forest biomes.[2] The Hrothi, averaging 146cm tall, are the second shortest tribe in stature, although they make up for this with their bulky upper bodies.[3] They are typically fair-skinned, with brown eyes and brown or red hair.[4]

The Hrothi possess a number of biological adaptations that make them particularly well-suited to subterranean life. In addition to their strong upper bodies, which assist them in digging, they also benefit from special senses that allow them to navigate their underground environment with ease. They are capable of finding north and determining time of day even when underground, and their short height allows them to fit into small spaces and keeps their movement from being hindered while crouching. Their eyes are also well-suited to the darkness, allowing them to see underground even with little to no light present. As their genetics are tailored for underground life, they are naturally adept at researching new crafting patterns, and have reduced crafting times when using stone materials.[4]

Although the tribe is well-suited to the underground, they are at a disadvantage against other tribes when it comes to speed, and are incapable of executing vaulting maneuvers. Since the Hrothi are shorter in nature, they cannot reach objects as easily as larger tribes, making larger mounts unusable and limiting the maximum size of objects they can utilize.[4]

Compared to the Neran, Hrothi are stronger and more durable, but lack the agility of their more lithe counterparts. They are one of the more mentally-advanced tribes, possessing a good balance among their mental traits, and are slightly above-average in their social attributes, as well.[4]

The Hrothi can be found both inside and outside the great mountains that border the cool temperate steppes. Over the years the Hrothi have created vast networks of caves, caverns, and tunnels which lie deep underground, while they use the fields and forests on the exterior of the mountains to cultivate food, hide, and other natural resources which cannot be grown or raised inside. In general, the Hrothi have or use the following resources: 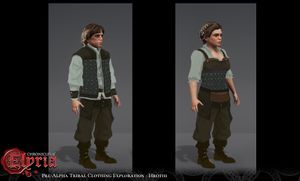 Overall, there is an emphasis on fire-resistant clothing. 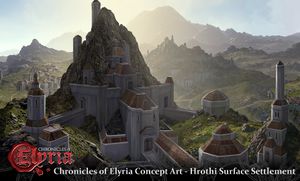 Not all Hrothi settlements are the same, they take the local terrain both above and below ground into account, and that what you see on the surface is usually just the tip of the iceberg. Natural voids like the grotto in the concept art are capitalized on, but where they don’t exist, expect to see tighter, smaller tunnels connecting the “buildings” the Hrothi have carved out of the stone, without the broad streets and vaulting ceiling spaces.

The Hrothi always take advantage of what they find as they dig around. If a hill turns out to contain a natural cavern, or if the terrain is shot through with crystal that can be used to channel or diffract light for natural lighting, they’ll incorporate what they find into their settlement planning. The two Hrothi concept arts are meant to be linked, but the natural grotto is meant to be far below the surface feature and relying on light traveling through the natural crystals found throughout the mountain in question.[8]

The Hrothi are a strong people, and bear their title of "Shields of Virtue" with pride. As a people, they value wisdom and longevity above all else, and work ceaselessly at their crafts in order to create works of architecture and art that will stand the test of time. With their stubborn nature and reverence for the enduring comes an inherent dislike for the weather, causing most Hrothi to prefer to remain indoors or underground where temperature and climate are relatively consistent. The Hrothi generally have great memory and believe that all sins should be remembered and paid in interest, causing family feuds to be a common ordeal in Hrothi society.[4]

The Hrothi share close linguistic ties with the other Proto-Neran Tribes, speaking both Neran and "Næroth," a gruff and grating language, the traditional tongue of the Hrothi that rarely makes it out of the mountain.

The Hrothi represent one of the two Virtorian Tribes, and are known within the faith as "The Shields of Virtue." According to Virtori teaching, the Hrothi were called upon by the Creator to defend the world against the Vices and to protect Mann-kind from being led astray.[4]

Hrothi religious practices are less institutional than those of the Neran, but they nonetheless remain very dedicated to the Virtues and the Virtori beliefs. "Shields of Virtue," their moniker within the Virtori Church, translates more accurately to "Stalwart in Virtue", representing their unwavering duty to uphold the Virtues' will. The Hrothi celebrate this sacred duty by constructing monuments monuments depicting historic events of the Virtues, which can be found throughout their civilization. Unlike the Neran, their structured hierarchy views titles and rank as distasteful, as the Virtues are infinite and undying while everything else is temporary. Oddly, the Hrothi tend to be freely accepting of others with differing religious beliefs, so long as they maintain their virtue.[4]

There is a saying among the Neran that “Hrothi make good neighbors,” and for many, the Time of Charity is the truth behind the axiom. [9]

The Hrothi see the period of Longest Night as a test of their virtue. They believe the Creator has put them to the task of ensuring the world’s continuation, through the virtue of Hrothic Charity. Without charity, they reason, the world would fail and die in the cold dark.

So, when the Hrothi see the Eye’s return, they immediately throw themselves to the task of growing, baking and stockpiling foodstuffs that will last through the long winter. In the time leading up to the long winter, many often mistake the Hrothi preparations as hoarding, which is further proof to the Hrothi that this a test from their Creator. In order for the Hrothi to weather the frustration of their trading partners, upset at the severe reduction in trade, they will need to enter the long cold prepared to offer their neighbors the food stores they need to survive the three-year winter, as gifts of Charity. The gifts are offered free of obligation and even left, in cases where it’s possible, for their enemies at the gates of their settlements.

Brudvir allied with Hrothi settlements will often assist in fortifying and security the expanded food stores, as a way to “earn” their share.

The Hrothi consider their occupations a form of art, which is represented in the multitude of stone golems and intricate carvings produced by their civilization, and the fame brought by their master masons, smiths, jewelers, and scribes.[4]

The Hrothi are lore-keepers and historians who use music as a medium, using ancient songs in their modern music. They utilize the history of many tribes, not just their own, some of which have been forgotten by the other tribes.[4]

Like their Neran counterparts, the Hrothi have a largely capitalistic economy, dominated by local guilds which make up the majority of their economy. However, due to their reliance on imports from the outside world, their population tends to remain fairly limited.[4]

The Hrothi social classes are divided primarily into four tiers: nobility, aristocracy, gentry, and commoners. They strongly believe in meritocracy, and hold that their highest social classes should be comprised of those who possess good judgement, wisdom, and experience. The Hrothi's highest leader is known as the Shield King; upon his death, if no heir is exists, his oldest vassal automatically obtains a casus belli to claim the throne.[4]

The preservation of knowledge and its transfer to subsequent generations are among the highest of the Hrothi's ideals. They train talented scribes to create elaborate scrolls and manuscripts, which are stored in library vaults beneath the surface so as to withstand the test of time. Hrothi wishing to pursue further education often seek out a guild, school, or apprenticeship.[4] 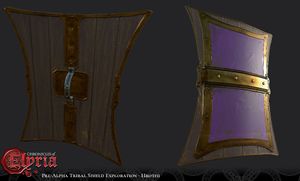 The Hrothi are typically peaceful and solitary, but are highly skilled in warfare and masters of defensive strategy, due both to their highly-defensible mountain homelands, and to their part in the legendary War Between the Virtues and Vices. They do not usually maintain a standing army, but are well defended by the dukes that maintain the entrances to their mountains, and are typically guarded by a county fitted with a garrison of soldiers, ready at a moment's notice.[4]

Neran: The Hrothi and the Neran are long-standing allies due to their common lineage and Virtori faith. The partnership between the Neran and Hrothi plays a major part in Virtori iconography, with the two tribes being represented as the Swords and Shields of the Virtues, respectively. Additionally, given the Hrothi's history as the former blacksmiths of the the Neran religious army known as the Holy Swords, a great deal of Hrothi influence can be found in modern Neran armaments.

Brudvir: The Hrothi and the Brudvir have long held a mutual respect for each other, being close neighbors and trade partners, as well as sharing a common language. The two Tribes enjoy a somewhat symbiotic relationship, with the Brudvir providing food and protection to the Hrothi in exchange for the metals and stone needed to build their woodworking tools.[4]

Kypiq: The Hrothi's unfriendly disposition towards the Kypiq stems mainly from distrust. The Kypiq, being another short-statured tribe, are one of the very few tribes capable of maneuvering through the Hrothi's small underground tunnels. Coupled with their enormous advantage over the Hrothi in terms of agility, their size makes them a potential defensive threat. In addition to this, their natural curiosity and propensity to shiny objects tend to cause the Hrothi to view them as untrustworthy.

Dras, The Waerd, and Erishé: The Hrothi's fierce determination to hold onto their monopoly in the metal market causes them to clash with any tribes who are able to provide an alternate source of metal ore. The Dras have access to bog iron, and the Waerd and the Erishé likewise have access to various metals and minerals from their desert homelands, making them essentially the Hrothi's direct economic adversaries.[4]