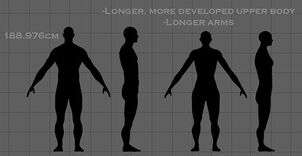 listen)) are one of the twelve Tribes of Elyria, and are found natively in the the Tropical Rainforest biome. The Janoa have longer, more developed upper bodies and longer arms, with an average height of 189cm.[1]

The Janoa have brown, dark brown, or light brown hair and yellow eyes. Their skin is olive or tan and their prominent Blaschko's lines help them blend in to their surrounding in the rainforests of their home biome. They are tall with a longer and more powerful upper body than most tribes which allows them to move through the trees more easily. The average Janoa is 6'3" (190cm) and weighs 175 - 200 lbs.[2]

The rain forest with its thick underbrush, poisonous plants, and predators is a harsh environment. It is a both a protection and a source of conflict for the Janoa. Each new season brings its own dangers: predators, locusts and other pests, landslides, and even drought.[2]

The Tropical Rainforest, while very dangerous, is also incredibly dense with impressive beasts. For the Janoa, that makes the Tropical Rainforest the perfect place to call home. Their biome contains plentiful amounts of resources on which to subsist. With the Janoa's unique adaptations being most suited to it, it's unlikely they will grow out of it. 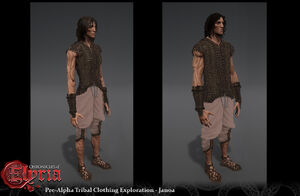 Their homes reflect their culture's Hunt-centric mentality. Homes regularly feature a dedicated trophy room, as well as areas for the many herbs, medicines, and hunting equipment they use. Insulation against the rain is near-ubiquitous, with only the poorest lacking it. Homes are typically situated on short stilts to keep them level over the roots and vines criss-crossing the jungle floor, and also to keep the home from sinking into the mud when it rains.[2]

The Janoa were once one tribe with the Dras. Over time, some members of the tribe developed striping which gave them better camouflage in the jungle and made them better hunters. The "Unmarked" eventually came to be seen as a liability and were banished.[2]

Janoan society is ordered around "the Hunt." Members of the tribe earn greater respect through their skill as a hunter and the trophies they acquire. They adorn themselves with pelts, claws, skulls, feathers, and teeth of their prey to show their standing in the tribe. When disputes arise among the Janoa, they are settled with a physical contest of skill between involved parties. The Janoa consider themselves superior to most other tribes whose members fail to display proof of their prowess in battle. This attitude, combined with the abundant resources and great dangers of the jungles has lead the Janoa to be rather isolationist.[2]

Stubbornly against learning other languages, you'll encounter Jenu in the Janoan rainforests. Those wishing to negotiate or trade with the Janoa may pick up enough of the staccato vocabulary to get by, but most will seek the services of a translator, usually Drasean.

For the Janoa, far removed from the cold of winter in their tropical homes, the Night Hunt (their name for the Longest Night) is considered an important moment. [9]

The jungles become dangerous in the dark, and the most powerful predators of the biome roam more brazenly as they stalk their prey in the dark. This includes, of course, the Janoa themselves.

It is a rare opportunity for young Janoa to prove themselves and potentially to acquire great renown and, through the spirits of their kills, great power, and wisdom.

To the Janoa, this is the way of things, ensuring that the weakness of those failed hunters is culled from the settlement, ensuring it remains strong and powerful for the next generation. Many Janoan myths and legends incorporate the Night Hunt as an element of the hero’s rise to power, their triumph in the hunt used as a symbol of the power they will exhibit in the rest of the tale.

The Festival of Passage is a major ritual of the Faedin religion.[10][11] The Janoa honor this time with the Contest of Passage. This comprises a month-long tournament where people fight within a circle against other people, or against a selection of animals, to demonstrate their prowess.

For the Janoa, the Passage is a time to strengthen and refine the soul, driving out weakness as one might drive impurities from steel; with heavy blows and fierce strength. The Contest of Passage is a grand melee in the Janoan culture. It is a year-long contest of strength, with each member fighting multiple opponents and strong predators in several bouts throughout the year. With each victory the soul strengthens, gaining some of the power of its opponents and shedding its fears and other weaknesses in the process. A Janoa warrior throws themselves into the Contest, hoping to ascend its ranks to be named the greatest warrior and the strongest soul.

It is said a warrior knows themselves only after the Contest of Passage, only when they have seen the pinnacle of their strength. Among the Janoa, it is expected to show well in the Contest; to face your opponents, fight fierce, and stand true in the light of combat’s judgement. The Contest of passage is an important milestone in Janoan life, whether it comes when one is young or old. Many tales of their heroes begin with surprising victories in the battles of the Contest of Passage, be they at the hands of an unproven whelp or an old Janoa who steps finally out of shadow to shed weakness and attain greatness.

Upon the entrance of a new warrior into the fray, the Janoa produce accompanying Sounds of Passage on their berimbau-like instruments.

The To'resk may use the contests of the Janoan as a series of events in which to gamble upon.

Janoan entertainment is based around contests of skill, storytelling, music, and art. Contests of physical combat as well as Toad in the Hole, knife throwing, and arm wrestling are common. The Janoa have a strong oral tradition and especially appreciate hearing the tales of past kills told by their Shamans. Janoans sing songs of the spirits they look to for strength, often mighty or even mythical creatures. Tales of the hunt are often put to song with specific instruments representing different animals in the tale. The Janoa are known for their ornate clothing and adornments as well as Trophy Trees carved in remembrance of great conquests. [2]

Janoan society values the individual and the Hunt. The social classes are as follows:

To even be considered a full-blooded member of the pride, a Janoan, once becoming an adult, must complete a hunt as a right of passage. Completing a hunt does not a Blooded make, however, and it is expected that one will acquire trophies in order to earn the right of a Trophy Tree. The tree is almost always a prominent location on the property owned by the Janoan. The more prominent the trophy, the more decorated the Trophy Tree, and the stronger the individual, the higher a Janoan may rise.

The Honored frequently see to the border patrol of their own territory personally, as it is only natural that invaders meet - and are subsequently defeated by - the mightiest one in the area straight away. If a non-hostile invader is found, it is also their right to gauge the threat.

The most powerful and revered hunter among the Honored takes the title of Prime and accepts no royal guards while in the borders of his or her Dominion, as it would show weakness. Below the Prime, are the Klave who oversee the military prowess of the Janoa and rule their own domains, called Anktree. Within each Anktree, the Talar run the individual counties, or Gleem, while individual settlements are know as Rings and are managed by a Proven.[2]

To become a Janoan leader, one must be a capable hunter who possesses many sought-after trophies, and a demonstrated warrior. Once achieved, they remain Honored or Proven until their time of death. As the Janoan hold great respect for the bloodline of an Honored or Proven, the children of the Honored or Proven are expected to take over the mantle of their parents, when they die.

When a power vacuum occurs, prestige of trophies is not enough to choose a new leader, as a seasoned Hunter past his prime would not be respected as ruler. Casus Belli is given to whomever among the eligible hunters proves themselves most potent in trial by combat.[2]

Young Janoans are primarily taught by their parents through practical lessons, training hunts, or time spent at the local hunting academy. Hunting academies encourage competition in every subject taught, and students often seek out a rival to practice with. The alchemy and merchant organizations of the commoners are much less competitive, making their livings from the unwanted materials brought back by the hunters.[2] 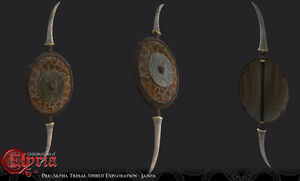 The resource rich nature of the Jungle means that the Janoans find that their need are more easily met within their borders than without. Although the Janoans have attempted conquest in the past, these days they are mostly content to remain within their own domain, with the exception of those who leave the jungle to hone their skills in particularly peaceful times. Thus, Janoan mercenaries and assassins are not uncommon in the warmer parts of the world. Janoans rely on guerrilla warfare and traps to defend their borders. Invaders must also contend with more and more warriors as they push deeper past the borders and news of the invasion spreads among the people. Warriors communicate in the field by leaving markers and signs in particular locations.[2]

To'resk - Though they have wildly different cultures, the Janoa and To'resk have a strong trade relationship. The To'resk trade Maize and the Milk of the Talonreed (a stimulant) for Janoan lumber, gold, alchemical solutions, and opiates. The To'resk also hire Janoan mercenaries to make up the bulk of their military.[2]

Dras - There is no open antagonism between the Janoa and Dras, but there is plenty of animosity. The Janoa believe that casting the Dras out from their culture was justifiable. The Dras also prefer consensus-building and find the bold individualism of the Janoa off-putting.[2]

Kypiq - The Janoa disdain the Kypiq for their small size and refusal to seek glory in the Hunt, though they respect their skill at stealth. The Kypiq abhor the callous and wasteful way the Janoa treat the Fae spirits and refuse to hire their mercenaries.[2]