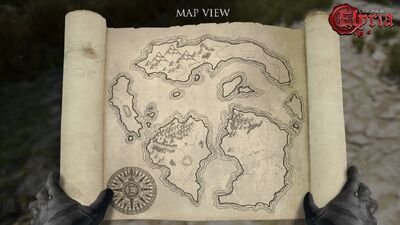 Chronicles of Elyria will have no auto-map or mini-maps. Maps will be just another item that players will be able to craft using the Cartography skill, one of the sub-skills of Lore Skills[1].

Maps are small, stackable objects which sit in your inventory like any other item. They can be bought, sold, traded, destroyed, stolen and crafted.[2]

NPCs will refer to locations with the names that are commonly written on maps.

Maps in CoE are divided up into 8 different scales:

This skill allows you, using in-game tools, to draw/sketch/stencil maps of your area.

This skill is used with maps and other tools to help characters to find their location in the world.

There is actually a mini-map in CoE but it's not your standard map. It serves as a survival tool and is tied to your character's senses. It shows what your character hear or smell. This allows to leverage both player senses as well as character senses and create a tighter bond between the player and her/his character.