listen)) are one of the twelve Tribes of Elyria.[1] Neran are found natively in the Grassland, Lower Montane Forest, Mixed Leaf Forest, and Shrub Steppe.[2] In general, Nerans represent the "average" Child of Mann, being valued for their adaptability rather than any specific environmental advantages. They typically possess medium-tone skin, brown hair, blue eyes, and are of average height and build.[3]

Of the twelve Tribes, the Nerans share the closest biological similarity with modern humans. They most often exhibit a medium skin tone with brown or auburn hair, and medium-to-dark blue eyes. Unlike most other Tribes, Nerans lack any distinct environmental adaptations, but rather excel in their flexibility; their adaptability to many different biomes and their ability to diversify make them well-suited to a wide variety of tasks and playstyles.[3]

Mechanically, Nerans benefit from a 20% increase in the rate of learning new skills; however, their capacity to perform these skills is unchanged. This allows them to diversify their skill set more easily than other tribes, while still requiring significant effort to become proficient in a single discipline. In a sense, Nerans can be considered "jacks of all trades, but masters of none."[3]

The Neran feel most at-home in their native grassland biome, but can also function at varying levels of effectiveness across many biomes in the temperate zone, ranging from semi-arctic to semi-tropical. Beyond this range, their effectiveness and survivability begin to drop off.[3] 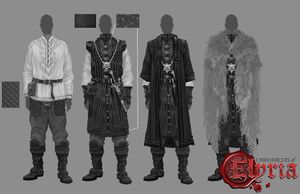 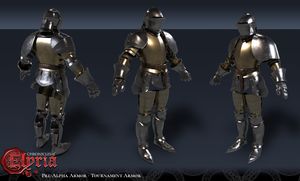 The bounty of the grasslands has long provided the Neran with the room and resources needed to thrive and innovate, serving as a blank canvas on which to develop their society. As such, Nerans highly value ingenuity and resourcefulness, both in themselves and in their allies, and strive to make the most of the opportunities that the land affords them. Many of their advancements come in the fields of architecture and agriculture, which has allowed for the development of a vast and highly innovative agrarian society.[3]

The Neran speak the Neran language. This language is historically spoken by the Neran and has, through their prolific trading, become the language-of-choice for business and mercantilism beyond the borders of predominantly Neran settlements. This language's alphabet and phonology is effectively identical to English.

The Neran are followers of the Virtori religion, and are often referred to in its lore as "The Swords of Virtue." According to Virtori belief, the Creator tasked the Neran with enforcing the will of the righteous upon those who would seek to corrupt the virtue of Mann-kind. As a result of this calling, the Virtori religion penetrates deeply into many aspects of Neran society, most notably their art and architecture. The Neran pride themselves in public displays of their religious devotion, often in the form of statues and monuments to the Virtues.[3]

The core beliefs of the Virtori lead many Neran to maintain a stoic sense of order and commitment. Just as in their civilization, the Neran follow a strict hierarchy of leadership in their religious groups. Nerans who are not Virtori followers are often looked down upon by their peers and referred to pejoratively as the "Fatherless".[3]

For the Neran, Longest Night is a time for kindness, called the Twilight of Care. [7]

As Neran families lay in supplies and prepare for the long dark, they also traditionally set an additional place at the dinner table each night, a symbol of their willingness to offer succor to any who might appear at their door in a trying time for Elyria. And, should any such unfortunate soul in need appear, asking for food, for example, Neran families take it as a sign to show that kindness, inviting the stranger in and offering them a meal and a warm fire.

In more modern times, especially in crowded Neran settlements where strangers may be harder to gauge, this takes the form of a nightly communal meal at the neighborhood level. The affair is a grand potluck where each family attending who has the means contributes a dish to the meal, offering mutual support and kindness to aid the entire community through the dark, cold night. Sometimes called the Long Feast, these group meals can become continuous affairs that literally last the entirety of the dark winter.

Neran society is largely capitalistic, with a substantial portion of their economy being comprised of merchant and artisan guilds, regulated by the local government. They are most well-known for their tailoring, weaving, distilleries, breweries, prized vegetation, and cultivated meats.[3]

Neran leaders are often believed to rule by divine right, with the Creator having granted the mandate to rule only to the most virtuous of families, and to those who fought in the great War Between the Virtues and Vices. In the nobility and aristocracy, titles are typically hereditary, being passed down to the family's next generation upon death.[3]

Nerans typically learn their trade through their family, or through a guild, school, university, or other apprenticeship; however, regardless of their craft, all Nerans are expected to have a basic understanding of Virtori teachings. Their religious education is often directed by missionaries known as Song-Priests, whose religious duty is to spread knowledge of the Virtues throughout the land.[3]

Due to their ingenuity and ability to pick up new skills with ease, the Nerans enjoy one of the highest levels of technological advancement out of the twelve Tribes. Many of these advancements are agricultural in nature, allowing them to truly thrive in their native environment and make the most of what the land has to offer. Of course, Neran farmers are still at the mercy of the forces of nature, and despite their ingenuity, natural damage to their crops is sometimes unavoidable.[3]

The official army of the Neran consists of a group of religious warriors known as the Holy Swords, who believe themselves to be strengthened by the Virtue of their faith. They answer directly to the Kingdom's sovereign ruler, who is in turn advised by the Virtorian Church. Those wishing to join this prestigious group must be admitted into the Virtorian Military Academy, or trained as a page or squire under the tutelage of a steward or standing Holy Sword.[3]

Hrothi: The Neran have traditionally been close allies with the Hrothi, possessing a long history of brotherhood through their shared faith. The Neran and Hrothi are often referred to by Virtori followers as the Swords and Shields of the Virtues, respectively, and are often depicted as such in traditional religious iconography. The Hrothi once served as the blacksmiths of the Holy Swords, and have for ages been an integral part of the religious aspects of Neran society.[3]

Kypiq: The Neran appreciate the resourcefulness and industry displayed by the Kypiq, and consider them dependable allies when they share a common interest. Many Nerans find Kypiq culture and architecture fascinating, often trading for their fine silks and standing in awe of their vast forest cities. While usually close trade partners and allies, the Kypiq and Neran have been known to clash at times when their interests do not align.[3]

Brudvir: Although they share common heritage, the Neran and Brudvir can at times be uneasy allies; their religious and cultural differences often stand in the way of what should be an obvious alliance. Many Brudvir view the Neran as disrespectful and prodigal, although the high-quality fabrics and food that the Neran provide make the harsh winters of the alpine forests easier to bear. In turn, the Nerans turn to the Brudvir for their skilled wood-workers.[3]

The Neran are not known to be unfriendly to any particular tribes.