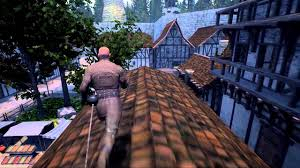 Screenshot showing a character running across a rooftop

Parkour is a training discipline using movement that developed from military obstacle course training. Starting with Assassin's creed, some modern video games started to include the practice of parkour as a key gameplay element that allowed players to climb, swing, slide, duck, and roll through the game's architecture and terrain.

Chronicles of Elyria will have a parkour system , implemented with known actions such as jumping onto/over obstacles, climbing and rolling.[1][2] Little information is yet known about parkour as a specific Skill apart from there not actually being a specific Skill for parkour and that attributes such as strength and agility will determine one's ability to move freely around within the Elyrian world. Therefore, parkouring can be considered a 'combined skill', helpful for some speciic character roles like explorer and hunter.