The skills of a character are specific abilities a character has acquired through learning. Learning skills can be done via studying and/or training. Skills evolve as the character develops. Together with attributes and knowledge, skills determine the ability of both player and non-player characters to perform tasks effectively and/or efficiently. For this page we only look at the game embedded skill mechanics, and not at so-called "player skills".

While players may have different opinions about which skills makes up the best Champion or Explorer, every character is made of their own combination of skills that span seven top-level categories. In general, Champions will be made up predominantly of Combat Skills, Explorers of Survival Skills, Producers of Crafting Skills, Suppliers require various skills and fields of knowledge that support gathering materials form various sources, while Bards will rely mainly upon Art trees, with Lore and Guile that are not particularly related to a specific role at the moment. However, any of these skill trees can be mixed and matched with others, all coming together to form or fit a unique character, play-style, or identity.[1][2]

For player characters, player skills also add to the equation. Player skills relate to their ability to read their characters environment, predict what will happen in the near future and their abilities to act and respond using their keyboard, mouse and/or console. Such skills can also all contribute to the effectivity and efficiency player characters can perform tasks. As those skills are not in the scope of the game design, apart from the goal to provide decent user interface and system support, player skills are not discussed on this page. 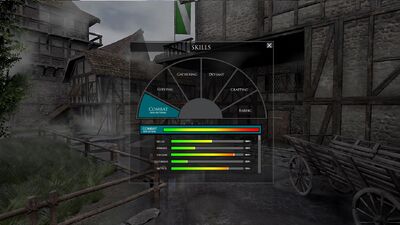 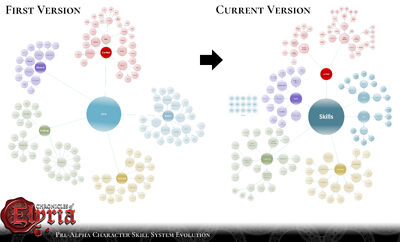 Beneath the top level of each skill tree there are secondary and tertiary skills which are referred to as Parent Skills. For example, below the Combat Skills skill-tree lie the parent skills Melee Combat and Ranged Combat. Each of these is a Parent Skill which contributes to the successful execution of skills below.

In the above example, One-handed Flails, Hammers, and Maces are all type of One-Handed, Blunt Weapons. Since improving in One-handed Axes causes one to improve their One-Handed Blunt Weapons, when training their one-handed hammer skill, one would see a smaller gain in one-handed flails and maces.

Skills Mastery in Chronicles of Elyria is divided up into tiers with a percent mastery for each tier. The tiers are broken down as follows:

The percentage mastery reflects how proficient you are with a specific skill, but it also inversely reflects the percentage of people who will ever attain a specific skill tier. In other words, based on the amount of time it takes to level a skill, you can expect distribution of mastery across a server for any given skill to look like the following:

Put differently, the Soulborn Engine monitors progress and provides bonuses as necessary to ensure the top 1%, 10%, of players in a skill will eventually reach the Legendary or Grandmaster tier for that skill.

One should also note that those skill tiers reflect the percentage of players and not player characters that reach these skill tiers. It will, in general, take a player a single character's lifetime to become a Master, multiple to become a Grandmaster, and even more to become Legendary. 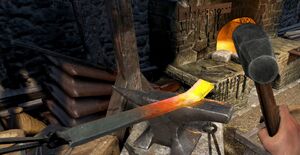 In-game view of someone hard at work

In an attempt to discourage endless grinding, Chronicles of Elyria will institute a system called "rewarding for failure" when practicing a skill.

The Tribes will vary in their innate ability to learn new skills and to perform those skills.