First and foremost a soul is the complete set of memories, experiences, and past lives of a character. When transferred from one character to the next the soul brings its achievements and accelerated Skill Development, providing a feeling of continuity and progression.

A soul is also the link between a living character and their physical body. In most cases, the Spark of Life cannot exist in a body without a soul. Without a soul, the body will die.

What isn’t a soul? A way to make the game seem fair. In addition to the aforementioned, the soul brings with it a degree of randomness, as not all souls are created equal. Some have experienced more past lives, making them inherently more powerful.[1]

Each base account will be granted 3 Souls on the server of their choice. Accounts can have souls on multiple servers, but beyond the initial 3 they must be purchased with Soul Packs.[2]

Character creation in Chronicles of Elyria is a multi-step process that begins within the Soul Chamber. The Soul Chamber is where souls go in order to rest, recuperate, and plan the time and place of their next incarnation. 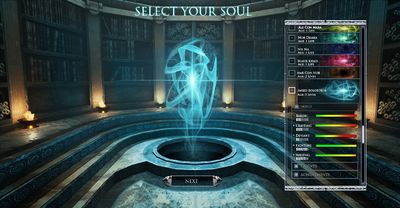 The first step in character creation is to select which soul you want to use. In the soul selection screen you can see the name, age, affinity, skill ramps, and past achievements of each soul. [3]

When a soul package is claimed, it's tied to a particular server, and when creating a character the system uses the character's birth date and location to determine whether the character will have the chance to obtain a talent in their lifetime.[4] 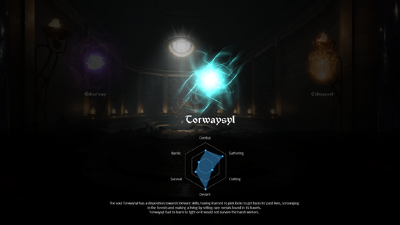 Your soul has an affinity with Light or Dark that is influenced by the actions your characters take. This may affect many things throughout your journey in Elyria.

Ref.:[citation needed]
Your character skills will determine it's coloring at the character selection screen. All souls have lived at least one previous lifetime, so all have some level of skills already known.

If you have skills from more than one line your soul will develop a different color than a solid red or solid orange.

An explorer who takes traits in combat and survival alone will likely pick up a deeper orange color.

Skills you learn affect your soul directly changing its color and how you will learn skills in your future lives.

If a player owns additional souls that they don't use, after the first year, the souls are increased to a 2-life soul, after the second year they're upgraded to a 3-life soul. That way, no matter when someone joins, the soul will have a similar skill-ramp as the average person who had played previous lives.[5]

Achievements in Elyria have lasting effects upon your soul that increase in strength as you complete them through successive lives.

Players can go a step further than marriage, binding their souls to one another. Such a ceremony is permanent, and the longer two people who are soul bound remain near one another, the tighter the bond.[6] Soulless creatures (ie. vampires) will not be able to soulbind.

Each soul has a kindred spirit, a twin, a soulmate that is identical in every way, which is guaranteed to be on the same server but has the chance to either inhabit a player character or be an unplayed soul that hasn't gone into the world yet. Soulmates can sense when they are close to each other.[4] Whatever the destiny of the soul, the twin shares the same destiny. This permanent link between souls can result in several benefits, or consequences. Potential benefits include such things as the sharing of talents and skills. However, if you and your soulmate have opposite affinity, the soulborn engine will drive you to try to coup de grace each other, resulting in permadeath.