Stealth will be a thief's best friend in Elyria. A player who has a high level of stealth will be much more effective as a deviant than one with out. Although not much is known about stealth yet we do know that visibility will play a large roll in it.

Stealth will not be carried out simply by a darkly clad figure hiding in a darkly lit area; the developers will be focusing on implementing a mechanic that will actually make the deviant harder to visually see through transparency or camouflage.[1] This helps to deter players from trying to "game" the system by simply manipulating the gamma and lighting of the game and or their monitor to enhance visibility in darker areas. 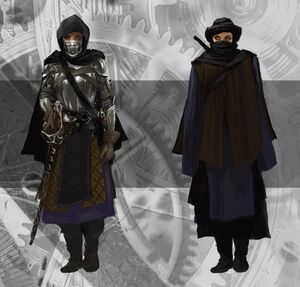 Clothing and gear designed to aid in stealth such as camouflage will aid in in deviancy.[1]