The Tribes of Elyria are the twelve major racial and geopolitical groups that make up the Children of Mann. Each is native to a particular biome or group of biomes, and has its own distinct culture and racial traits.[1]

There will be eight tribes on the starting continent at launch: Brudvir, Dras, Hrothi, Janoa, Kypiq, Neran, To'resk, The Waerd. Four additional playable tribes will be accessible after ocean travel is researched and their continents have been discovered: Erishé, Mydarri, Owem, Yoru.[2][3] It's important to note that even though there will be one continent at launch, all continents are being built and defined before launch and will be in-game just not accessible at launch. [4]

Apart from the aspects shown in more detail on this page (thougn still summarized), tribes all have distinct:

Cultural benefits are specific to tribal heritage. When your character has offspring, you pick what culture you want to teach the child. Cultural specific aspects apply to all families of all cultures. It's how you determine which cultural and religious benefits you want to pass to your children. [6]

There are a number of aspects that are characteristic for the physical and mental abilities of the individuals in the tribes. This section presents most of them in a summarized way. More detailed descriptions can be found in the separate pages for each tribe.

The table presented below provides an overview of the following specific aspects for each tribe:

Each tribe in Elyria has socio-cultural focus on two major societal themes. These relate to how they view and interact with the world. In other words, each tribe has a primary and secondary theme that guides them in defining their values, goals, social behavior, culture, and motivation.

Four distinguishable themes are defined. These are: Gladiatorial, Political, Commercial, and Civic.[15]

Commercial Primary Focus
Focus on money - primarily through free-market trade and crafting. Have an affinity for crafting or long-distance travel (merchants).

*The Dras tend to trade a decent amount in the south, but beyond that, their ability to work with jet, bog iron, ivory, and others - has made them capable crafters.[15] **Kypiq don't travel a lot, but they are amazing crafters - specifically tinkerers. Kypiq need to compensate for their small size, so they do so with invention and ingenuity. Like tree houses.[15] 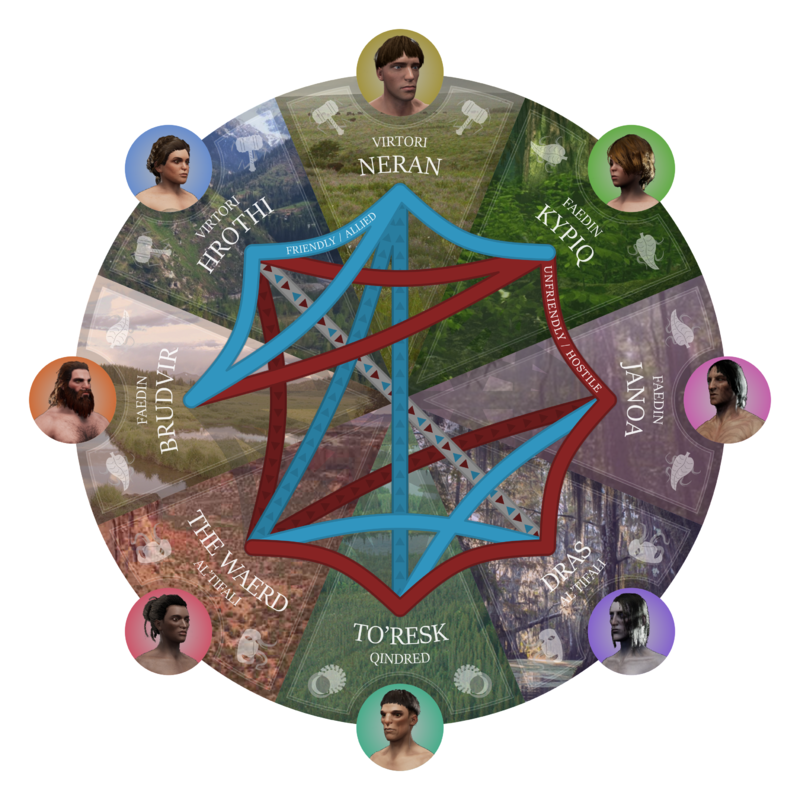 For players who wish to weigh their options playing a character of one of the starting tribes, Caspian shared some brief insights in the considerations to take into account when making your choice before selecting a soul for your character. [16]

HOLD: It is unknown if players will ever be able to select characters descending from other tribes than the original starting tribes!